When we spend time with the horses, we get into a routine of getting out to them early to catch the good light. The first morning we headed out to where we had seen them the night before. But they weren’t there. We drove as much as we could, then hiked some more. We saw a few, here and there, and actually found a small band that we had never seen before. We kept looking with the binoculars, and I finally found them about 5 miles from were we thought they might be.

We spent some time with them, then went back to the RV to check on the dogs and get an early dinner. With the sun setting earlier, we needed to be out fairly early in the evening to get the good light again. 3 hours later we drove to were they had been, and they were completely gone. Again, we drove and hiked in search of them. We never did find them.

The next morning we went out early again, and saw the herd running to water.

Check her out, she sure has grown since the spring.

We’ve never seen this little girl before. She is so cute! Timid too, she really stuck close to mama at the watering hole.

They got water, and then ran up and over a big hill into a whole different area. If we had not driven out when we did, we never would have found them. As it was, we hiked up over the hill with them, and spent several glorious hours hanging out with them.

They were pretty active, and there was some great photo ops.

We called these two the teenagers. They sparred with each other all day long. It was a constant source of entertainment.

Remember the sleeping photos I showed yesterday? Those were taken the next morning. We found the herd early, everyone was sleeping, grazing, just hanging out. All of a sudden, moms were getting babies up, horses were neighing, everyone was getting restless. Then suddenly they all took off. We tried to follow, but the dirt road was very very bad. They ran about 4 or 5 miles we estimate, in about 30 minutes. They ran past the water, and up and over the same hill to the area they had been at the day before.

I would love to know how, and why they all get the signal that it’s time to go.

I’m really liking my new lens, it gives me the ability to really get in close, and get those nice close-ups.

Check out this mares eyes, such a gorgeous color. One thing that makes the wild horses special, is their coloring. Since they are free to breed with those they choose, the color and markings does amazingly beautiful things. We have seen some awesome combinations.

Love the eyes on these cremellos.

And this mare is just gorgeous.

Of course, the golden hour in the evening is my favorite They just glow. 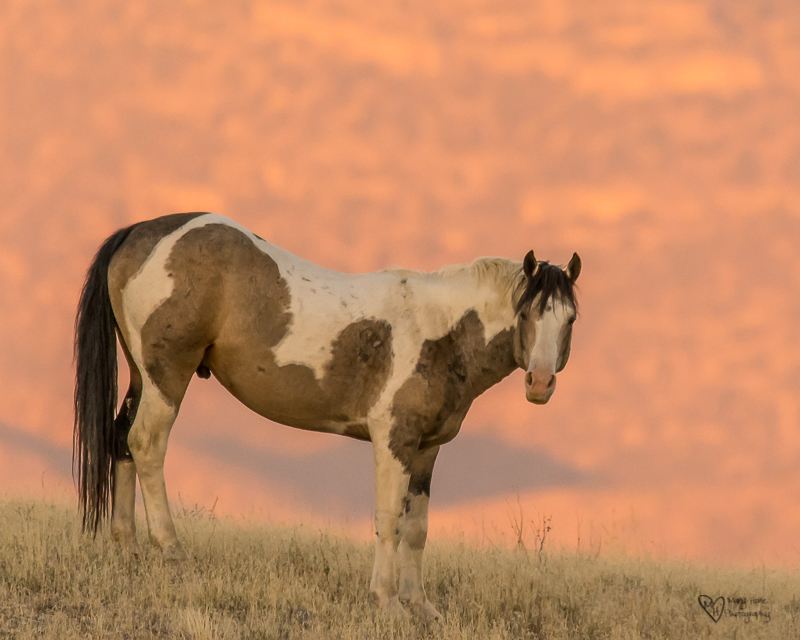 Al took some videos this last time, so I took some of them and put a video together.

I hope you guys have enjoyed more photos, and stories of the wild horses.